The annual sugarcane crush is about to get underway at MSF Sugar’s Maryborough, Mulgrave, South Johnstone and Tableland mills with an estimated 4,442,500 tonnes to be crushed by the group this season.

In the areas located near Mulgrave and South Johnstone Mills, this means the cane rail network is now active and cane trains are operating throughout the region.

Across the network, 20 locomotives will operate 24 hours a day, seven days a week from now until the end of November.

Cane trains are iconic to the Far North Queensland landscape and attract interest from both locals and visitors. However it’s important to remember that they also bring risk.

As stated by MSF Sugar’s Mulgrave Mill Manager Chris Hoare, “Our rail network sits dormant for six months of the year, and becomes active for the last half of the year during the cane crushing season which generally runs from June to December, depending on the milling region.

“This creates a level of complacency among motorists.

“Our cane rail network is critical to the industry – it’s a part of our transport team’s workplace and allows us to get our growers sugarcane back to the Mill safely.

“We hope the public will join us to help make sure the cane crushing season is a safe one, by remaining aware and alert when crossing the rail network.”

Ken Hall, MSF Sugar’s Cane Supply Manager for Mulgrave and South Johnstone Mills, highlights just how important it is to pay attention on the roads.

“It’s important to understand just how dangerous cane trains can be. There’s an incorrect assumption that cane trains are ‘small’ and can’t hurt you, but this is far from correct” says Mr Hall.

“The average loco weighs 18 to 40 tonnes and the stopping distance for a loco under load is approximately 250 metres – this is assuming a dry straight track with good stopping conditions.

“We place a great deal of importance on the safety of the MSF Sugar team and our communities. Public safety is our highest priority and we would like to remind the community, particularly parents and children, about the dangers of playing on or near cane trains and railway tracks”.

The sentiment is echoed by Mr Hoare. “Cane trains operate 24 hours a day and while our crossings in urban areas feature audible signals and flashing lights, many of our rural crossings feature a Give Way sign only. It is important to be aware of this when approaching or crossing our lines throughout the region”.

Motorists and pedestrians are reminded that when a cane train is approaching, it is a legal requirement to Give Way at all times. More importantly, motorists are reminded that being aware of cane rail crossings will ensure their own safety and the safety of those around them.

“If you see a track, think a train” said Mr Hoare.

Image Above: During the 2017 crushing season, an incident occurred between a locomotive and a semi-trailer on the Bruce Highway. The driver failed to stop for flashing lights at an active crossing (a level crossing with flashing warning lights). The incident highlights the need to remain vigilant around cane railway lines.

NOTE TO THE EDITOR:

To assist parents and teachers in educating primary school-aged children about the cane rail network, MSF Sugar has developed a range of video resources that can be accessed through MSF Sugar’s YouTube Channel. You are welcome to reference and use these as file footage. 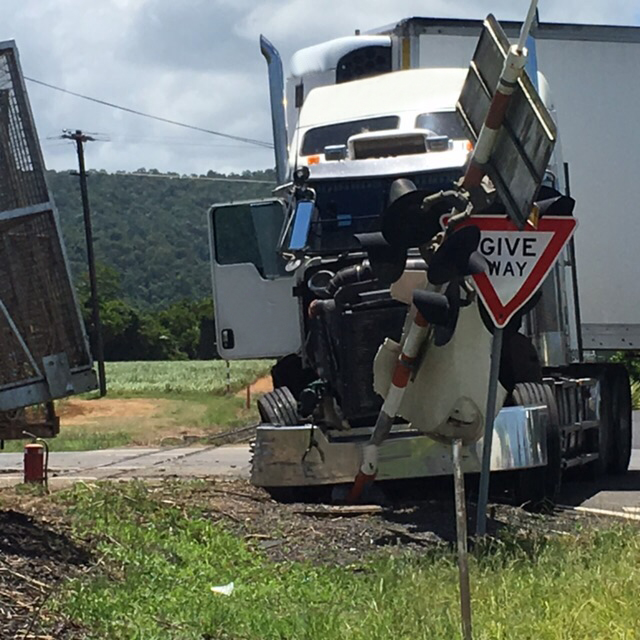 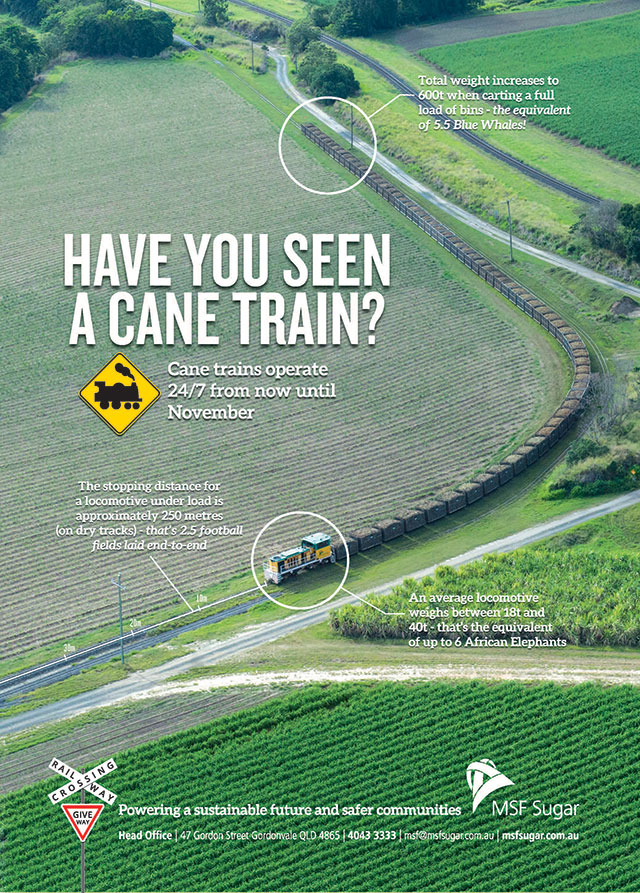