Net AUD/T (IPS) subject to change with changes in the ICE 11 market price affecting unpriced exposures, movement in the AUD/USD exchange rate and also due to  movements in the Shared Pool.

What a month and a half it has been for the sugar market! The explanation behind the recent rally appears to have been a tale in two parts.

Firstly, commodities in general have rallied to their strongest level since 2011 as virus vaccinations, increased travel and roll out of vast economic stimulus by the worlds governments has resulted in boom demand for raw materials. Fears of inflation has also added to the strength of commodities which are a natural hedge to inflation.

The second part to the recent rally has undoubtedly been Brazil and more specifically conjecture around the size of the crop which commenced harvesting in April. Major sugar traders Wilmar and Czarnikow released updates in late April painting Brazil’s sugarcane crop as a disaster due to ongoing dryness across the region. Below is a graph of September-March rainfall in Centre South Brazil going back to 1990 which does show a significant drop in rainfall during the crop development period. 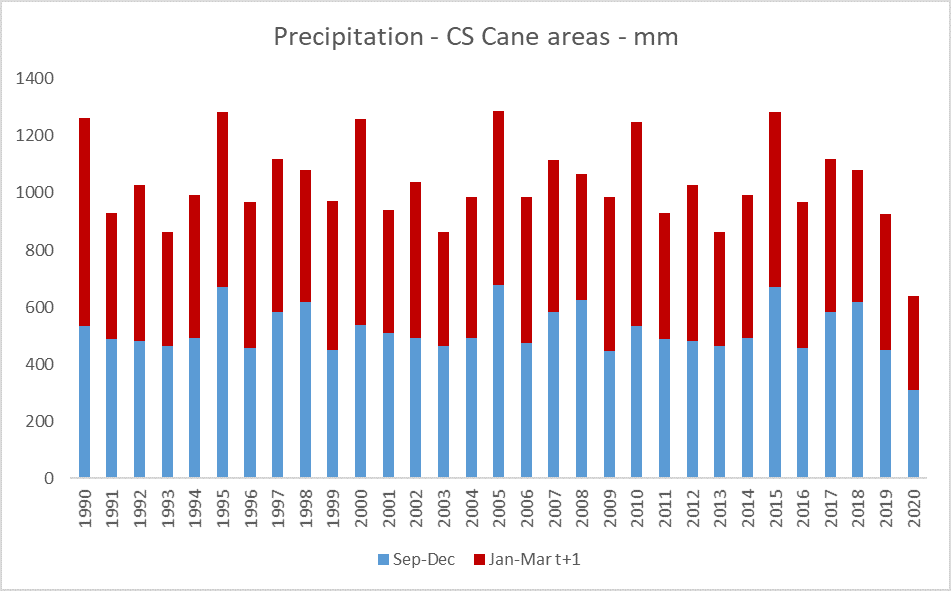 Brazilian sugar industry group UNICA released its latest fortnightly crushing results on the 12th of May for the second half of April. Cane crushed, sugar and ethanol production for this period compared to the same period last year was significantly lower as only 205 mills were crushing as at 30 April 2021 compared to 217 last year. In terms of cane yield the average to date is 79.8 tonnes per hectare which is a 10% drop on 2020. This would appear significant however only a small sample of mills provided yield data and first round results can be misleading as we know.

Elsewhere the world remains largely unchanged, India has nearly exported it’s 6 million tonnes of sugar covered by the government export quota. At these prices it’s likely India will carry on exporting excess sugar stock without a subsidy once the quota is exceeded.

The AUD has traded around 0.77 with the USD for much of the past month having increased above 0.78 in recent days on the back of poor jobs data out of the United States.